How to Say Honey in Korean 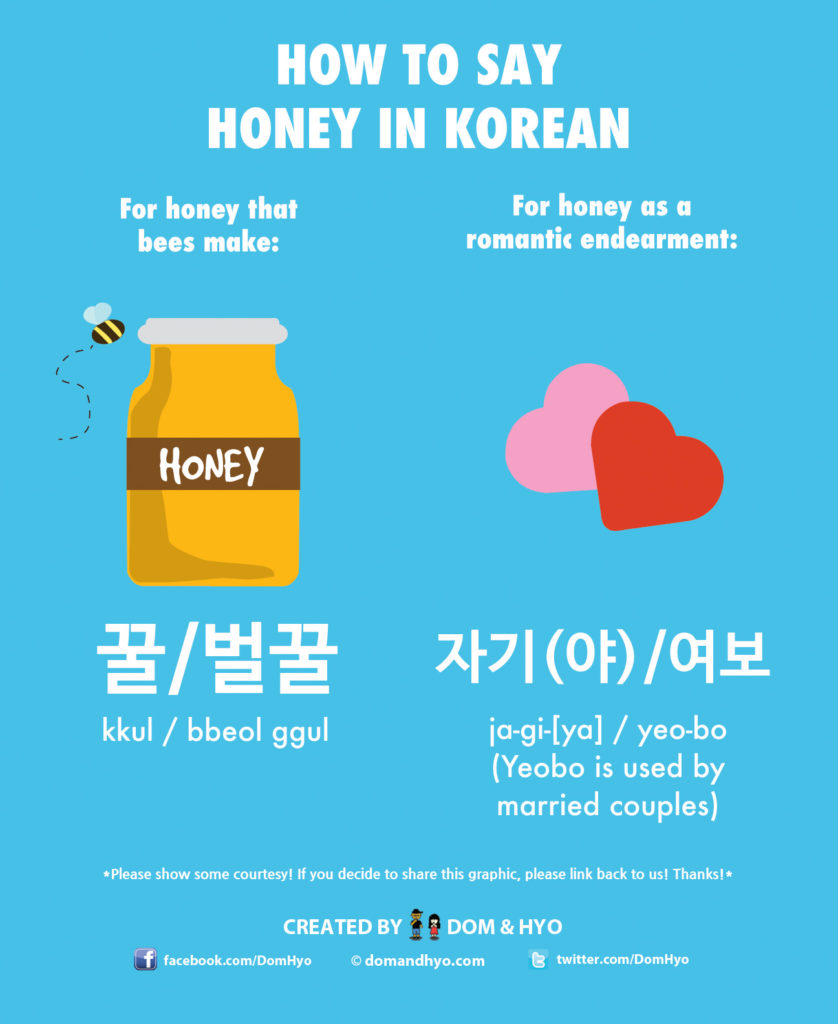 Koreans are just like most people and when they are in romantic relationships, they like to use terms of endearment towards their sweethearts. There are many that they use (click on the previous link), but today, we’re going to focus on a specific one. Namely saying “honey” in Korean.

The terms 자기 and 여보 are used a lot in conversation between couples (you will hear it on drama a lot). For 자기, you can use this when you are dating or when you are married.

The casual verb ending “야” is also added which is standard when you calling someone who is close to you by their name or by a certain title. So for example if you wanted to get your sweetie’s attention, you would simply say “자기야!”. Really simple right?

For  여보, this is usually only supposed to be used for married couples, but some people like to joke around and use it while they are dating. You would use it in the same manner as 자기 except 야 is usually not added at the end although people still do it.

If you wanted to say something like “I love you honey” in Korean (casually), you would say:

Also, you should remember not to use these when talking about one another to other people. You would use terms like 남자친구/여자친구 (boyfriend/girlfriend) or 남편/아내 (husband/wife) otherwise it would sound REALLY awkward.

Honey/babe, what do you want to eat?

Honey, when are you coming home?

Second meaning of Honey in Korean

For the next meaning, it is of course referring to the sweet food we like to eat. It is simple called “꿀” or “벌꿀”. The second one literally means bee honey. If you move to Korea and love honey, now you can find it in the market when you need it.

The English word is also sometimes turned into Konglish with 허니 as another form of endearment.

Koreans love honey and like to make certain ginger honey teas which are delicious. Hyo usually puts some in her tea that she gets from her mom. It’s pretty good.