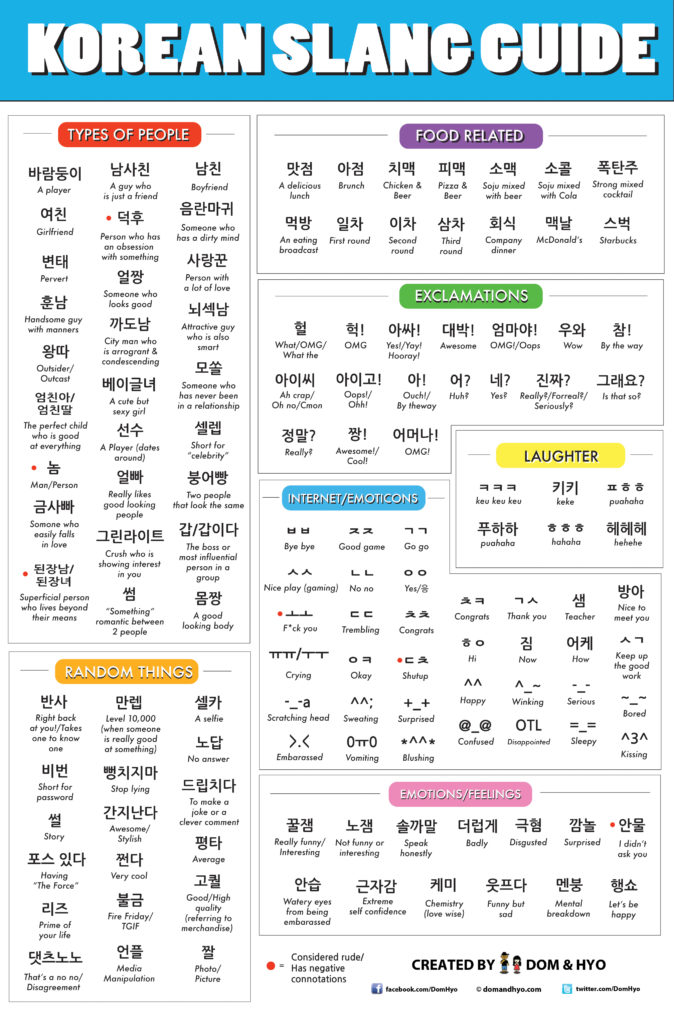 We did a post earlier on Korean slang. It is very short and I’ve always wanted to do something with a little more depth to all the Korean slang out there.This graphic shows the basic meanings of each word and some have a red dot next to it indicating it can be rude or have negative connotations.

You can find many of these used on the internet, in text messages, and in real life. These phrases and words are meant to be used with close friends of yours. There is waaaay more slang out there than this (including phrases that we don’t want to include here hehe) and there are lots of resources and other books on Korean slang that will get you a more deeper understanding behind the words as well. For now, you can use this post as a quick reference.

Here are a list of the words in the graphic with a bit more explanation on each.

바람둥이 = This is commonly used for a guy who cheats a lot. Basically a playboy. “바람” means “the wind” in Korean so it is alluding to how the wind just goes wherever it feels like.

덕후 = Someone who is obsessive about a particular interest or subject. Similar to otaku in Japan. This is considered rude if you use it to someone who isn’t close to you.

음란마귀 = You can use this for a person that is always injecting dirty thoughts into regular conversations.

얼짱 = Combination of 얼글 which means face, and 짱, which means great or amazing. So this means someone with a very attractive face.

사랑꾼 = Person who is full of love

훈남 = A guy that is both attractive and warm hearted. Comes from훈훈하다. Add in 남자, and you get this slang word.

뇌섹남 = Attractive guy who is also smart. Takes syllables from the words 뇌 (brain), 섹시하다 (to be sexy), and 남자 to make one word.

왕따 = An outcast. A person who gets bullied a lot and has no friends. Often a mean word used to certain kids at school.

놈 = Man or person. Has negative connotations and should only be used with close friends. Frequently attached to other words to make curse words.

선수 = Player. Not like an athlete, but someone who dates and plays the field too much at the expense of other’s feelings.

셀렙 = Short for celebrity in Konglish.

얼빠 = Person who really likes good looking people and is easily taken by them. This word comes from 얼굴에 빠지다.

붕어빵 = Two people that look or act the same.

된장남/된장녀 = Superficial person who lives beyond their means.  남 is the male version and 녀 is the female version. Has negative connotations so be careful how you use it.

그린라이트 = When your crush is showing active interest in you and you have the “green light” to pursue. This is “Green Light” written in Konglish.

반사 = Takes one to know one/Right back at you. You can use this as a way of “throwing back” an insult at someone.

고퀄 = Good quality. Can refer to products from the store and comes from 고 which means high, and 퀄리티 which is konglish for quality.

댓츠노노 = That’s a no no. Konglish phrase that you can use when you disagree with something or someone.

언플 = Media manipulation. Comes from the prhase 언론플레이 which means media play. This word describes how the media can twist things to make someone or something more popular or put in a favorable light.

아점 = Brunch. A combination of 아침 (morning/breakfast) and 점심 (lunch)

치맥 = Chicken and beer. A combination of 치킨 (chicken) and 맥주 (beer)

소콜 = Soju and cola mixed together. Take the first syllables of 소주 and 콜라 and combine them.

폭탄주 = A bomb cocktail. 폭탄 means bomb and it is combined with 주 which is a terms for some types of alcohol.

먹방 = An eating broadcast. 먹어 means to eat, and 방송, means broadcast. Take the first syllables of each word, and you get 먹방.

일차 = The first round. On a night out with friends, “rounds” are counted. First round is usual dinner and drinks.

이차 = Second round is usually a bar or lounge where more drinks are poured.

삼차 = The third round typically involves more drinking in addition to the noraebang.

회식 = Short for company dinner. 회사 means company, and 식사 means meal. Combine the first syllables of each word, and you get 회식!

ㅋㅋㅋ = The most common form used to express laughter. Sounds like kekeke.

키키 = Similar to the one above and is also used frequently.

ㅍㅎㅎ = Copy of how many people say puahaha in English.

푸하하 = The full form of the one described above

ㅈㅈ = Good game. Short for 지지 which sounds like gg.

ㅇㅋ = Okay. Comes from the Konglish version of okay (오케이)

ㄷㅊ = Short for 닥쳐. Is very rude and you would rarely use this. Most people use this when they are really upset and arguing with someone in the heat of the moment.

ㄱㅅ = Short for 감사합니다 which means thank you.

어케 = Short for 어떻게 which means how.

OTL = Disappointment. The OTL looks like a person on their knees with their head down.

노잼 = Opposite of 꿀잼. Means that something is not funny or interesting.

극혐 = Extreme disgust with something or someone. This word comes from 극한 (limit)  and  혐오

깜놀 = To be really surprised. This comes from 깜짝 놀라다 and is used pretty frequently.

안물 = I didn’t ask you. This is a really rude way of saying you didn’t ask for an opinion and comes from 안몰라봤어요.

안습 = Watery eyes. This is used to describe what happens if you’re in an embarrassing situation. Comes from 안구에 습기차다 which roughly translates to the eyeballs become wet and damp.

근자감 = Extreme self confidence or self esteem with no reason for it. This word comes from 근거 없는 자신감 which means to have self esteem based on nothing or just because.

케미 = Chemistry. This describes that electric feeling between two people who get along well and something romantic could blossom. This is basically the short form of Chemistry in Konglish.

행쇼 = Let’s be happy. Cheer someone up with this phrase after a hard time. Comes from 행복하십시오.

Learning Korean is Easy when You Have this Starter Pack

Learning the Korean language can seem like a big task at first, but the way you learn can make it a simple and fun experience.

Whether you want to understand basic words in K-pop or K-dramas, impress your Korean friends, or simply learn more about Korean culture, the Korean Language Starter Pack will help you quickly learn and remember the most commonly used Korean words and phrases today.

• Cheat Sheets – 17 printable Korean word lists that ensure you always have access to the most commonly used Korean words.

• Weekly Vocabulary Guide – Kickstart your Korean vocabulary with 16 value-packed lessons that you can conveniently complete at your own pace.

Receive all future updates by e-mail when they are released, as well as a bonus printable poster from our store! Simply email us with your order number and the name of the poster you would like.

Immediately after purchase, a zip file will be available for instant download. Remember, this is a digital file that will conveniently be sent to you right away (not a physical book).