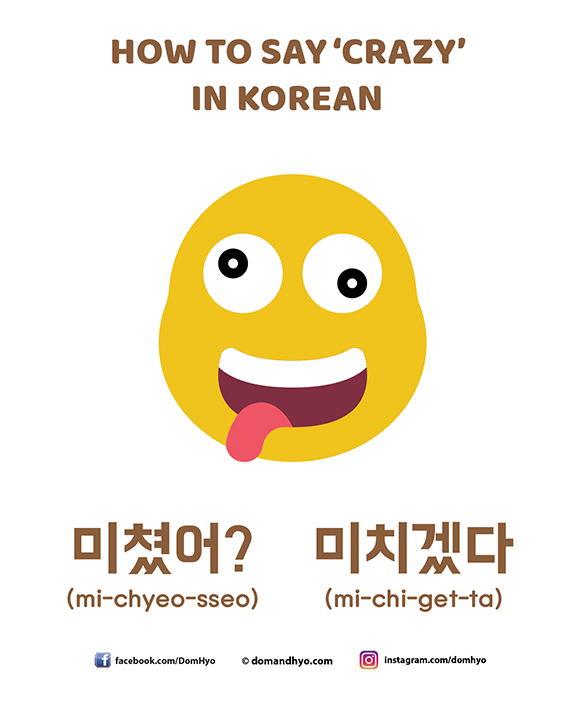 In English, crazy has evolved where it doesn’t always have a negative connotation. For example, you could say “That movie was crazy!” which means it was good. Or you could similarly say “That party was crazy.” No one would think you are rude if you were to say crazy in these contexts. In Korean, using the word crazy is usually seen as rude and in certain situations, the equivalent of a curse word. So be careful using this word.

Let’s break it down!

This is the verb ‘to be crazy’ with its verb stem attached. People rarely use the word in this form though. It’s usually conjugated into a future or past form. So if we were to use the past tense form, we would get:

The former is the standard form, and the latter is the casual form. In context, these could be used in a manner like this:

Now keep in mind with close friends, saying something like “Are you crazy?!” could be fine to use if they’ve done something off the wall. It wouldn’t be seen as offensive. But using it towards a stranger is like asking for a fight. Also, using the casual form is more common.

These are the declarative future conditional form and basically means ‘I’m going crazy’ or ‘I’m gonna go crazy’. You will hear this often, and lots of times, it’s not directed at a specific person, so it’s a little less offensive and can even be used in positive contexts like the English examples we used in the introduction for this article. But it can still be offensive if you use it like ‘You’re making me go crazy.’

This is the noun form of the verb and when it’s used like this, it is usually very offensive. It’s usually attached to any noun used for a person which basically directly calling that person crazy. We will list some terms here (keep in mind these are basically curse words and you should probably never use them. )

You’ll hear these frequently in Korean gangster movies (along with a slew of other Korean curse words). Some very, very close friends will also use these with one another when joking around.

Finally, some Koreans will use the word crazy in phonetic Korean to sound funny. It’s not used seriously like the others, but it’s just fun to know.

And that’s it! Again, remember to be careful using these and when in doubt, just don’t use them until you get more familiar with Korean and the context around these words.