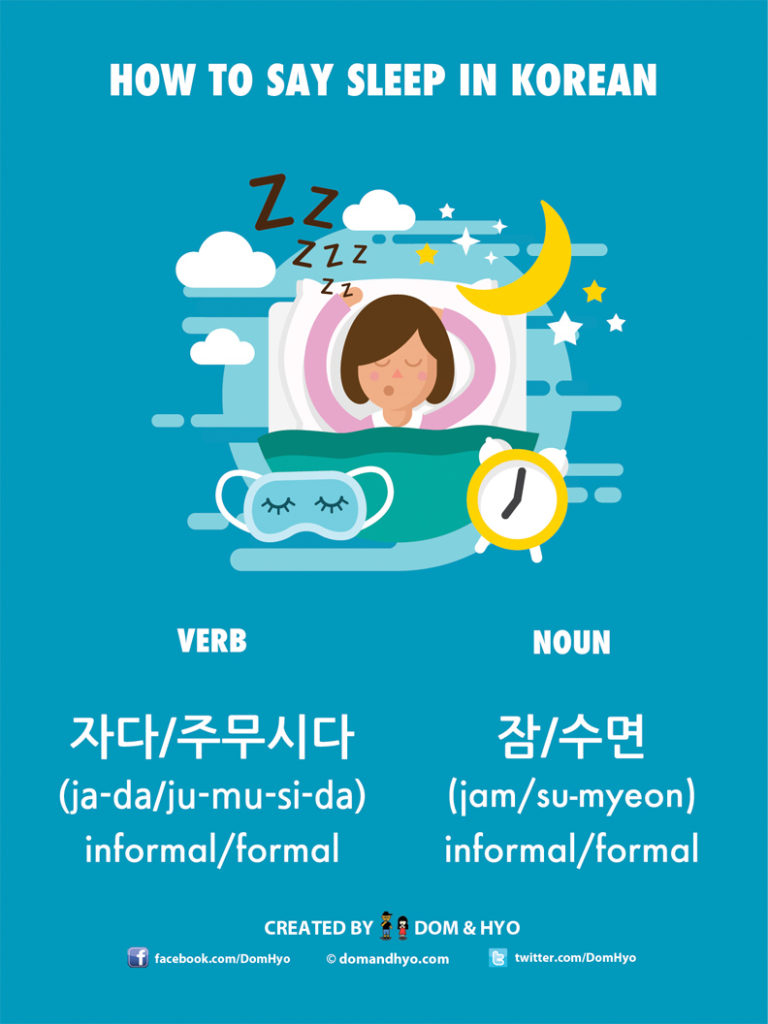 Ahh, sleep. One of the most important things for us to do to be healthy and alert is a good night’s rest. It can be tough with the busy and hectic world we live in, but I hope everyone is getting good sleep!

So how can we talk about sleep in Korean? we are going to break down the verb forms and the noun forms for you, as well as teach you some more sleep-related vocabulary. Let’s get started.

The verb form “to sleep”

For the verb form, there are two ways to say “to sleep.”

Let’s start with the informal version which is 자다 (ja-da).

One of the most common ways to use this verb is in the past tense form by asking someone if they slept well:

Another way is to tell someone to get a good night’s rest:

This can also basically mean good night. You can drop the 요 for both of these with people whom you are close with. You can respond with:

For future tense, you can tell someone you are going to sleep by saying:

Now for the formal form, you would use it with people older than you (especially elders). The formal verb is paired with another form to say good night:

I frequently use this with my parents-in-law when we leave their house late after a visit.

The first word, 잠, is frequently used in spoken Korean and is the less technical term for sleep. It is also based on native Korean instead of Chinese characters. It is frequently paired with the verb  자다 when you want to say you can’t sleep well:

Another way to say you can’t sleep is:

Now for the formal version of the noun form, 수면. You will actually rarely hear or use this word unless you have sleeping problems and need to go to a sleep clinic (I did here in Korea). You will usually see signs for sleep clinics posted as (insert name here)수면클리닉, which is Korean for sleep clinic.

The word 수면 is also used with a different verb, 취하다. You may recognize this verb as meaning “to be drunk”, but it also has the meaning of falling asleep when paired with 수면.

And that’s it! Below, you can find more vocabulary related to sleep.