How to Say Thank You in Korean 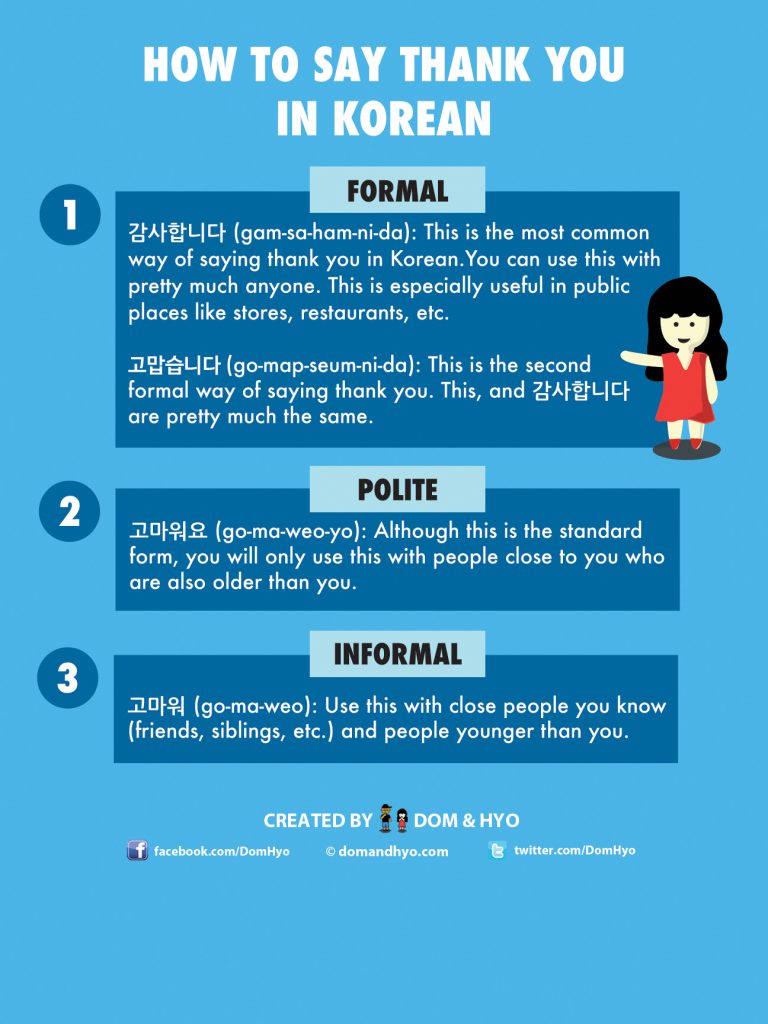 When I first started using Korean, I had watched a few dramas and I was always confused which thank you I should use. I heard the formal version most often, but also heard the impolite form.

It wasn’t until I studied Korean more that I found out about politeness levels and then it made sense of course.

For saying thank you, there are several ways like most basic phrases in Korean. You have the formal, polite, and informal forms to work with.

Let’s start with the formal version. There are two ways (romanization included):

감사합니다 (gam-sa-ham-ni-da):  This is the most common way of saying thank you in Korean.You can use this with pretty much anyone. This is especially useful in public places like stores, restaurants, etc.

고맙습니다 (go-map-seum-ni-da): This is the second formal way of saying thank you. This and 감사합니다 are pretty much the same.

Although you will hear both, 감사합니다 is used a little bit more often, so if you learn just one way to say thank you in Korean, learn the first one

Next, let’s move on to the polite way:

고마워요 (go-ma-weo-yo): Although this is the standard form, you will only use this with people close to you who are also older than you. Try not to use this with older people you don’t know. You will probably get away with it since you’re not Korean, but it will still be considered rude.

And finally, let’s move on to the informal form:

고마워 (go-ma-weo): Use this with close people you know (friends, siblings, etc.) and people younger than you.  I use this with Hyo of course and some close Korean friends of mine.

Now keep in mind, you can add words like 정말 in front of these phrases to say “I’m really thankful” or “Thank you very much.”

Now there are also a myriad of other ways you can say thanks to someone for doing something for you. For example:

This means “Thank you for spending time with us.”

Thank You Using Slang in Korean

Now let’s also do a brief rundown of thank you using slang. Young people mostly use these, but you can use them as well. Most of these are used in texting.

ㄳ / ㄱ ㅅ, 감사 – These are all slang shortened forms to communicate thank you. It basically takes the first consonants of the first two syllables in 감사합니다 and uses them for a basic and quick thanks to someone. The third one is self-explanatory as it takes the first two syllables by themselves to communicate thanks. Remember to only use the slang versions with close friends. It would look pretty bad if someone wrote these to their boss.

Thank You for Eating/Meals in Korean

If you want to say thank you for eating a meal in Korean, you wouldn’t even use the phrases above.

Before a meal, if you want to communicate something like “Thank you for preparing this meal”, you would say:

The literal meaning for this phrase is I will eat well but it functions as a basic thanks for preparing food.

The literal meaning for this phrase is “I ate very well.”

Saying No Thank You in Korean

Of course, if someone offers you something like food and you don’t want it, you will want to know how to say no thank you as well. However keep in mind that unless you know the person well, refusing food is seen as rude. I regularly refuse food from my in-laws, but at first, I just accepted and then gave the food to Hyo. However, most Koreans are understanding if you don’t like certain foods. It’s mostly with the older generation that you probably just want to politely accept and move on.

If you want to refuse something use these:

Now below, we are going to just list some common ways to say thank you for certain actions in Korean:

Learning Korean is Easy when You Have this Starter Pack

Learning the Korean language can seem like a big task at first, but the way you learn can make it a simple and fun experience.

Whether you want to understand basic words in K-pop or K-dramas, impress your Korean friends, or simply learn more about Korean culture, the Korean Language Starter Pack will help you quickly learn and remember the most commonly used Korean words and phrases today.

• Cheat Sheets – 17 printable Korean word lists that ensure you always have access to the most commonly used Korean words.

• Weekly Vocabulary Guide – Kickstart your Korean vocabulary with 16 value-packed lessons that you can conveniently complete at your own pace.

Receive all future updates by e-mail when they are released, as well as a bonus printable poster from our store! Simply email us with your order number and the name of the poster you would like.

Immediately after purchase, a zip file will be available for instant download. Remember, this is a digital file that will conveniently be sent to you right away (not a physical book).