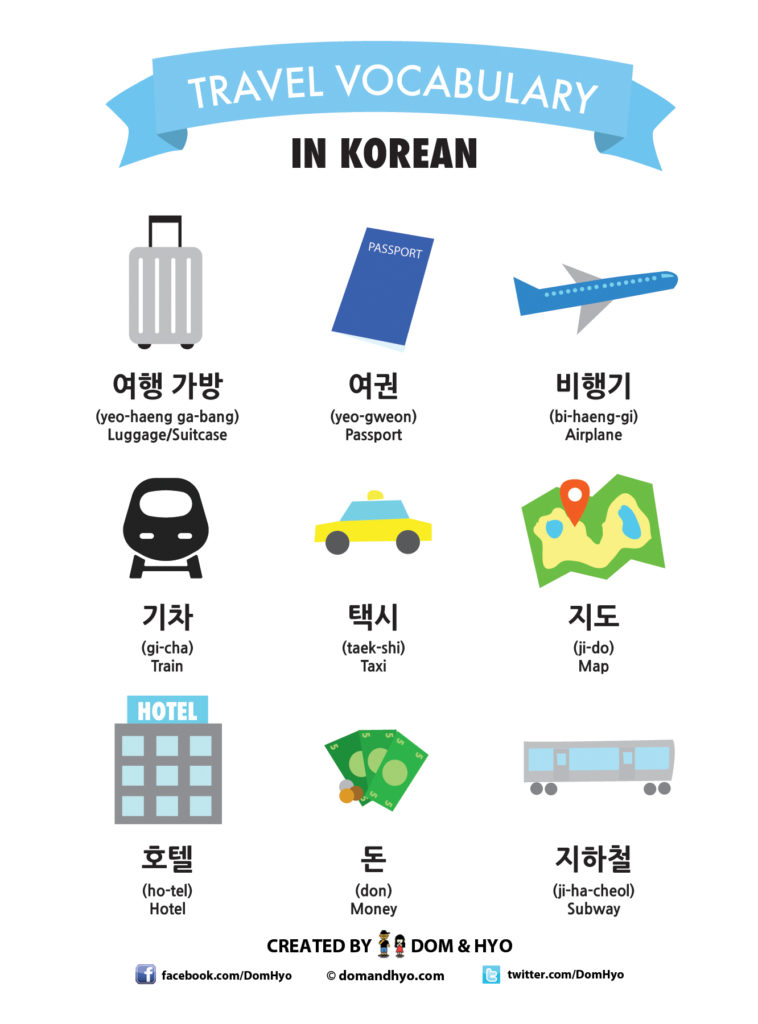 When Hyo and I met, we did tons of traveling around Korea and to some places around the states. We’ve been a bit busier lately and trying to save money so we haven’t been able to go as many places as we had been able to in the past.

I learned quite a bit of travel vocabulary from her and it was a quick way to learn some useful terms.

If you’re going be be traveling in Korea, these are some useful terms you can use and recognize on signs or when trying to communicate with someone. This is only part one, so look forward to another post soon.

Here is a list of the vocabulary in this infographic:

여행 가방 (yeo-haeng ga-bang) = Luggage or suitcase. Often times you can just say 가방 which means bag. Airlines may use this when asking how many bags you are checking but most ticket agents know English so this shouldn’t be a problem.

기차 (gi-cha) = Train. Korean has a great train system with the KTX. It can get you to most places around Korea in as little as 2 hours which is usually half the time it takes a bus. Traffic can be pretty bad during weekends and holidays so try to book your train tickets well in advance.

택시 (taek-shi) = Taxi. Taxis are cheap in Korea compared to most countries. However many of them drive like maniacs so wear your seatbelt!

지도 (ji-do) = Map. Use Naver Maps or Daum Maps as they have more locations listed than Google Maps in Korea.

호텔 (ho-tel) = Hotel. This is basically Konglish of the English word hotel.

돈 (don) = Money. This counts for cash and coins. If you are just talking about cash, you would use 현금.

지하철 (ji-ha-cheol) = Subway. Seoul has a great subway system. Easy to get around and although crowded at times, it’s very modern and convenient.


« Previous Post How to Say Milk in Korean Next Post » The Best Kimchi Refrigerators: We Review the Top Brands