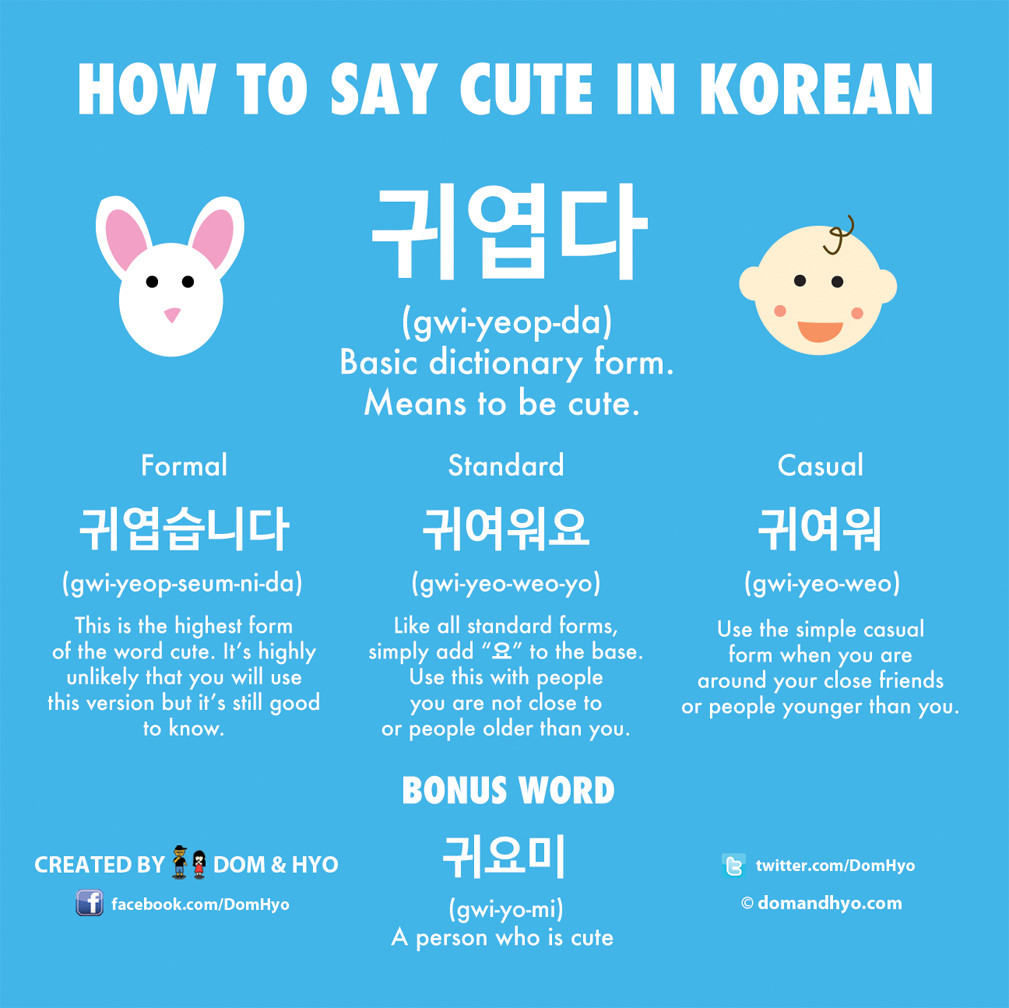 This is a word that you will come across often in real life and in dramas/kpop. Who doesn’t wanna say “cute!” when they see a baby, dog, or other furry little animal. For some reason, cute in Korean sounds cuter (not trying to make a joke) than its English counterpart. Maybe it’s the way Koreans say it as they have a tendency to really like cute things or make things as cute as possible.

Let’s start with the basics:

This is the basic dictionary form of cute. It literally means to be cute and you can often just say this as it is in most situations. However unless you’re pretty sure of how to use it, you will need to conjugate it.

Let’s take a look at the different forms you can use.

This is the formal version of saying cute. It’s not very likely that you will use cute in a formal situation though. For instance I highly doubt you would call your boss or teacher cute to their face. It really sounds kind of awkward even if you’re not using it towards someone older or higher in position than you.

This is the standard version that you will want to use around people who you are not close to or people older than you. Notice the 요 ending.

This is the one that you will probably hear most often and it is used around your close friends, family, and people younger than you.

Remember when in doubt, just use the standard version to be safe.

At the bottom of our infographic, you will see another word – 귀요미 (gwi-yo-mi)

This is a Korean slang word used to describe someone who is cute or acts cute. You could use this to describe a baby, child, pet, significant other etc. It’s a very versatile slang word.

Some people also use this to describe someone who uses a lot of aegyo (cute actions or noises). Hyo likes to use this for me when she jokes around.

Corny Joke for cute in Korean:

What do you call a cute person with no ears? 귀 없다!

없다 = verb that means to be without

귀 없다 = to be without ears


« Previous Post How to Say No in Korean Next Post » A Review of √Root Korean: A Dictionary of Korean Root Words (Hanja)