Out in Incheon: Chinatown and Freedom Park

So yesterday was Sunday and it was a pretty nice day. Sun was shining, a little warmth in the air…you could feel the tinges of spring. Then evening came, and reality set back in that it’s still not quite spring time warmth yet.

Anyways, we had a nice day out in Incheon. I proposed that we go to Chinatown seeing as I had never been there before. She decided we should also check out Freedom Park which was only a stone’s throw away.

First, we went to Freedom Park. We got off of DongIncheon Station and walked about 5-10 minutes up a a hill before coming up on the park. The park itself is not huge by any means, but there is a lot of space, and a great view of Songdo, the port, Incheon Grand Bridge, and the sea. There is also a statue of General Mac Arthur, an animal pen (with tons of birds and rabbits), and some nice flowers. 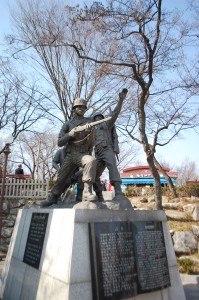 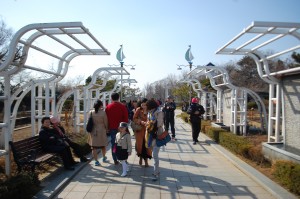 Next we headed down the hill right into Chinatown. Hyo found it (by luck haha just kidding she was a great guide) and we began to walk around. Overall it was smaller than i expected, but there were lots of restaurants, many with long lines outside of them. Ultimately we choose a restaurant that wasn’t so crowded and had some  깐풍기 (Ggan-pung-i…fried pork in garlic sauce). It was my first time trying it as although I have a 24 hour Chinese food place I regularly get delivery from, 깐풍기 is not on the menu. We also ordered some fried rice.

We were stuffed afterward, but still decided to walk around a bit more before heading back home. If you want to go to Chinatown, just get off at Incheon Station (the last stop on Seoul Line 1), and you can’t miss the big gate right outside the station that leads to Chinatown. Check it out^^