Korea has a lot of coastal cities to visit, and we seem to always flock towards the sea as we both love the water. Here, I’ll talk about 3 trips we took to 3 coastal cities in Korea. We highly recommend checking out these places.

Sokcho was actually our first trip together. I was on my second contract in Korea, and she was at a hagwon teaching. Our vacation dates matched up and we decided to check out Sokcho for a few days as her vacation was very short.

Located in Gangwon-do, Sokcho is a pretty popular destination to hit during the summer months and fall months. One big reason is Seoraksan which is not too far from the city center. We didn’t hike the mountain as one…we were lazy…and two, it was raining and dreary all day. We even tried to take the cable car to the top, but it was too foggy to see anything.

The city itself seemed pretty laidback and chill. We stayed at a hotel called “The Ship” which was perfect for the price, and gave a great view of the ocean and sunrise. The center center was nice with lots of shops, and of course seafood. On our last day, we went to the beach even though it seemed like it was going to rain again. It was a good close to the trip. Even though I was going through terrible insomnia at that time, it was still enjoyable.

Mokpo is underrated in my eyes. It’s way down south, and there are tons of little islands that you can go to from the city. There are lots of ferry services that will take you to these islands. Mokpo doesn’t have a lot of hotels, and if you don’t want to go the love motel route, then maybe check out the Shinhan Beach Hotel. Now the “beach” is very small, but the view of Mokpo bridge was awesome. At night, we went out to walk around and people were lighting fireworks, eating, etc. Very nice atmosphere.

On our last day, we took a ferry to one of the islands where there was a little water park. Riding under the Mokpo Bridge was pretty cool too. 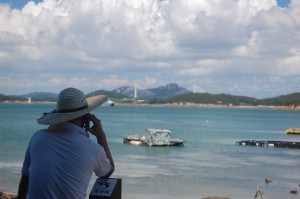 Mokpo also has a nice little city center with lots of restaurants. To get to Mokpo, you can take a bus or the KTX direct from Yongsan Station. It took us about 3 hours to get there by KTX (fast train).

Yes…everyone knows about Busan, but it is one of my favorite cities in Korea. Real laidback and lots to do. I’m not gonna go into bg detail about what to do as there is already enough on the internet. I will say check out Taejeongdae as it has spectacular views of the sea.

I would recommend going a little later in the summer season as it isn’t as crowded. Sadly, I forgot my camera on that trip and had to settle for mobile phone pics: 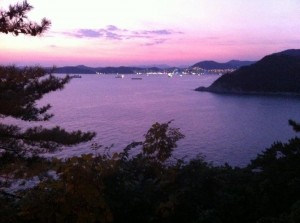 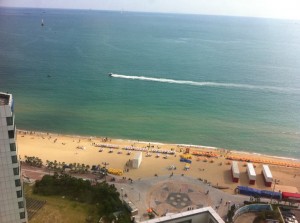 This summer, I hope we can check out Geoje and/or Jeju.